Until this past weekend, I was a Slickrock virgin.  Yes, I lived less than 2 hours from the famed trail, but I had never ridden it.  Why?  Well, the main reason simply was that I wasn’t ready.  I knew the trail would test my endurance, lung capacity, fear factor, and more.  So what happened once I finally got out there on all that rock?   I kicked major trail butt.

Originally we’d planned a trip to Gooseberry Mesa for this fall, but we decided to just head over to Moab for four days, since it had been a while since we’d ridden there.  With new trails like Captain Ahab and the North 40, we figured we’d have just as much fun in Moab as we would have in Hurricane… and we were right.

We drove over on Friday and went right to Slickrock. My boyfriend has ridden the trail a whopping 50+ times, so I knew he was the right person to show me the ropes out there. I was nervous, though. Really nervous. Calming my nerves a bit was the knowledge that I had a brand spankin’ new Gravity Dropper seatpost to help me out.

Since it was a Friday, the parking lot and trail weren’t nearly as crowded as they might be on a weekend day.  I’ve heard there are times when it’s so crowded out there that riders actually have to just wait in line to make it up or down portions of the trail. So there’s a hint: if you want to hit Slickrock when it’s not crowded, go during the week. 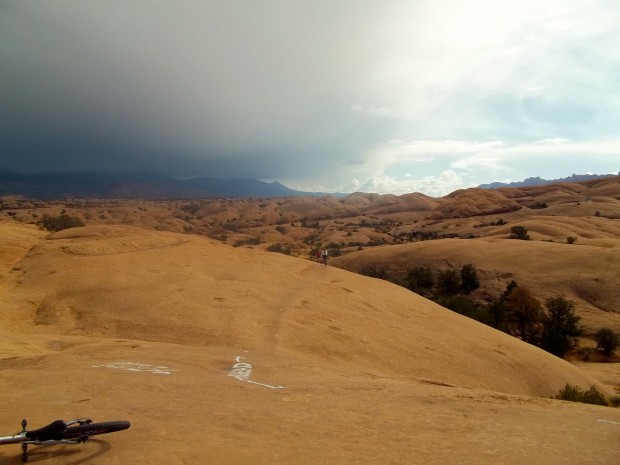 I swear, during the first few miles I was shaking.  The steep downhill sections didn’t bother me as much as I thought, however.  I’d drop my seatpost, get back and mumble things like, “you’re ok, you’re ok, you’re ok,” all the way down or just shout out an expletive… but I made it down those without much trouble.

What I couldn’t wrap my mind around for the longest time were the uphills.  I couldn’t do it. I’d start up something super steep and psyche myself out. The slightly-easier ones I’d pedal up with so much anxiety that I’d forget to breathe, then I’d almost collapse in a heap at the top. I swear, at one point I thought I’d given myself a hernia.

When we reached the end of the lollipop stick, I knew I had to change tactics or I wasn’t going to make it.  We sat down and had a snack and I cleared my head of all that anxiety.  My boyfriend reminded me to breathe and that, as much as anything else, was really helpful!  It’s not the first time we’ve had this problem.  If I’m nervous or hyper-focused on a steep uphill section of trail, I just hold my breath.  That isn’t a good move.  Breathing is key!  I turned on my “runner’s breathing” of 2 counts in and 1 count out, and we took off again.

This time I could feel the difference almost immediately.  The climbs were easier: I could stand up and pedal if I needed to, I didn’t collapse at the top, and more importantly, I was enjoying myself. The views on Slickrock are amazing!  Just blue sky and rock formations all around… off in the distance you can watch FJ Cruisers attempting crazy stunts on the 4-Wheel trail, too.

The most exhilarating moment came on a crazy-steep downhill.  About halfway down, the drop changed.  I was probably as close to out of control heading down that drop as I’ve ever been on a bike.  I was yelling with half excitement, half terror all the way to the bottom.  When I climbed up the other side and met up with my laughing boyfriend, I had to laugh too.  Wow!  What a rush.

We took our time riding.  The weather was just awesome, despite a thunderstorm darkening the skies over the La Sals, and the lack of crowds made me feel like we owned Slickrock for the day.   As we headed back up the “stick” of the lollipop, I couldn’t stop grinning.  I’d ridden 95% of that trail on my first try.  Sure, it was way easier with a dropper seatpost than it would have been without one, but the seatpost couldn’t pedal up the hills for me.  It couldn’t steer, brake appropriately, and guide the bike down steep drops.  That was all me, and I felt great about it! 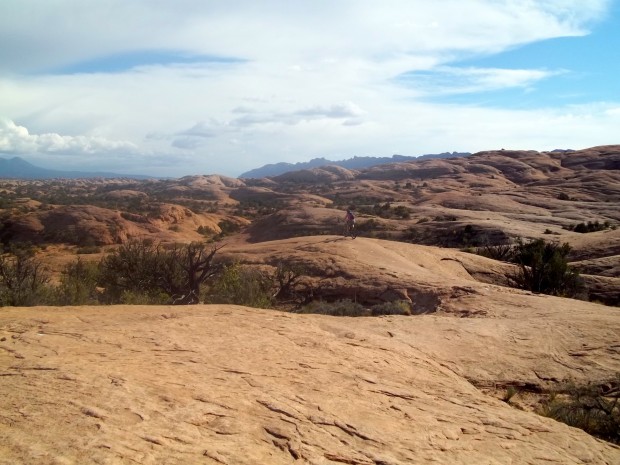 Slickrock is a sick and twisted kind of fun.  I’d ride it again because there are a few spots I need to conquer and because I do enjoy a tough climb sometimes.  What I liked about it most was that it was almost all rideable.  Steep and extremely challenging? Yes.  But did I have to walk much? No.  I like to be on my bike; I don’t often enjoy taking it out for hikes.

One word of caution, though: don’t ride this before you’re ready, and don’t take someone on this trail who isn’t already an advanced-intermediate rider. Trails are supposed to be fun and Slickrock will be… but only if you’re ready for it. 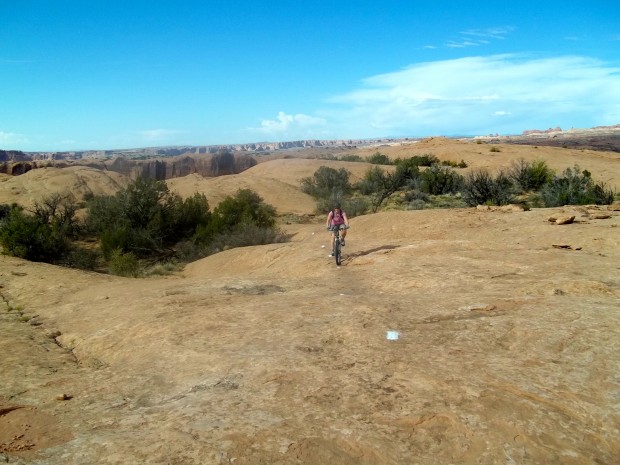 Your Turn: What was your first time on Slickrock like?

Great write up! I am a Slickrock virgin still……I just rode Lunch loop for the first time last weekend and had a blast (hiked some but still fun). I asked my hubby in the past if I like slickrock and he can never give me an answer other than “well it is different….”. Women’s MTB group I belong to go to Moab once or twice a year but I’ve never gone because I thought it will be too much for me. But after I read your post, maybe I can ride 65% of it and still managed to have fun (I have dropper post and 5-10 shoes, which is excellent on walking on rocks).

If you’ve got a good group to go with, then give it a shot! As long as you know what you’re getting in to, you’ll be fine. And you’re right, with those shoes you’ll have no trouble if you have to hike a section or two!

I was a fairly accomplished biker in reasonably good shape the first time I made the pilgrimage. While nothing on the route really spooked me, I was surprised just how much a mere 10 miles took out of me physically.

I’ve made three subsequent trips to Moab, but only one additional to Slickrock. It’s a ride everybody (who’s up to it) should do at least once, but there are so many other great trails in the area with more variety (especially with recent additions), that I doubt it will be the repeated “must do” that is once was.

There are so many rides there! The new additions to the Klondike area, Mag 7, Brand Trails, etc really added a lot of terrain. I think if you’re there for several days though, like we were, that once in a while there’s room for Slickrock. It’s sort of like the 401…I love it, on occasion!