Earlier this summer we asked Singletracks readers to nominate their favorite mountain bike destination and we received over a thousand great responses. While most Singletracks readers are in the United States, almost 40% live and ride outside the USA, and we’re stoked to get your recommendations for the best global mountain bike destinations to visit. Many of the top nominations are well known already thanks to international UCI and EWS competitions, while others are simply great places to ride thanks to an abundance of high quality trails.

I’ve grouped these mountain bike destinations by region, or you can use the following links to jump ahead on the list. Honorable mentions are included as well, so keep an eye on these up and coming destinations or visit them instead to avoid the crowds.

In addition to the following Canadian MTB destinations, be sure to check out the best mountain bike destinations in the USA, published earlier this year.

If one were to pick the best place on the planet for mountain biking, it’s almost certainly Whistler, particularly if we expand the area to include Squamish which is located about 60km (37mi) away. The Whistler Bike Park is world-class and sets the standards for trail design and construction that bike parks around the globe seek to emulate. The park itself is massive and mountain bikers can easily spend an entire trip at the bike park alone. But that’s just the start.

The natural trails in the surrounding area feature everything from loam to slabs, and range from dark and ferny forest romps to high alpine traverses. It seems like half of the mountain bike edits that come out every year are filmed in this relatively small area, and with countless pros and industry folks calling the Squamish / Whistler area home, the mountain bike community here is strong. Plan your visit for summer to experience the full variety of trails.

To be clear, Québec City isn’t exactly a mountain bike destination. Yes, there are a few trails accessible from the city, but the real attraction are two major riding areas, each within about an hour’s drive of the city center.

Mont Sainte-Anne is a resort area that’s hosted World Cup XC and DH races for more than two decades. The lift-served downhill trails are among some of the most challenging in the country, though there’s definitely something for everyone from weekend warriors to pros. The area also features plenty of pedal-friendly XC and trail rides to explore under your own power.

One great way to experience the riding in the area is to sign up for the Québec Singletrack Experience stage race held in the summer each year. Based out of the city center, riders experience six of the best trail routes over the course of six days.

Fernie isn’t really located near anything, which is part of what makes it such a true and great mountain bike destination. This classic mountain town gives riders access to lift-served trails at Fernie Mountain Resort, and also one hundred plus miles of singletrack spreading in every direction. The incredible alpine scenery is as much a draw as the trails themselves with the Canadian Rockies soaring about the town. Like Whistler, Fernie is best experienced in summer months, though in shoulder season riders can find even more solace.

Dawson City in the Yukon Territory of Canada continues to grow in popularity with mountain bikers. Cumberland, British Columbia is another under-the-radar destination that’s been a popular stop on past BC Bike Race events. Golden, Revelstoke, and Kelowna are also popular BC mountain bike destinations, and the Banff / Canmore area in Alberta features endless miles of quality singletrack for trail riding while serving as the official start of the unofficial Tour Divide bikepacking race each year.

A few spots in Mexico are beginning to emerge as mountain bike destinations as well, including parts of Baja and in the state of Oaxaca.

Finale Ligure, Italy is somewhat unique among global mountain bike destinations because there’s no snow skiing there in winter. Classic mountain bike destinations tend to be mountain towns, but Finale Ligure is both steep and beachy, with riding available year round. Gerow describes Finale as “Whistler-by-the-sea” and with so many quality trails to choose from, it’s easy to see why.

Mountain bikers are likely familiar with Finale from recent Enduro World Series competitions there, and the local mountain bike community is active in building and maintaining trails for everyone to ride. There are seemingly endless shuttle options and pedal-friendly loops in the region offering incredible wide-ranging views and fast, tree-covered sections alike.

Innerleithen is located southeast of Glentress and is another popular 7 Stanes ride center. Riders will find shuttle service at Innerleithen, along with spectacular views and well-maintained trails. Innerleithen is known for some of the best downhill riding in the country, and there are also great XC routes as well. The town of Innerleithen makes for a great base to visit the Tweed Valley.

The town of Morzine, France sits smack dab in the middle of the French Alps, offering some of the best mountain biking on the Continent. Despite being such a popular mountain bike destination, riders need only pedal out a few minutes to have the trails all to themselves. Many come to ride the lift-served, resort-style trails but there’s also a massive network of backcountry trails to explore too.

One of the best known routes in the area is the Grand Tour Portes du Soleil which links together about a dozen resorts. The Morzine Valley is a regular stop on the UCI World Cup mountain bike tour, hosting both DH and XC races.

The Tyrol region in Austria is a must visit for mountain bike tourists thanks to the many bike parks and the 1,000km-long Bike Trail Tirol, which circumnavigates the area and is said to be the longest mountain bike trail in the Alps. Ainsa, Spain is located in the Spanish Pyrenees and has dozens of miles of trails to explore. Lenzerheide, Switzerland and Vallnord, Andorra both offer world-class bike parks and are frequent World Cup mountain bike tour stops. Afan Forest Park in Wales, UK is one of the top MTB destinations in the country and features a bike park along with dozens of miles of natural singletrack trails.

Over the past several years there’s been a concerted effort to build mountain bike trails and infrastructure around the town of Derby, Tasmania, and the effort is clearly paying off. The Enduro World Series is making its second stop of the 2023 world tour there, and the local government continues to pour funding into promoting MTB tourism. Like many mountain bike destinations around the globe, Derby is transitioning away from an extractive economy based on logging to one based on outdoor recreation.

Almost all of the best riding can be found in an area known as Blue Derby, with 125km of trails snaking through the forest. Here riders can find shuttle services, bike rentals, and camping among the sprawling purpose-built trail network.

Rotorua, New Zealand may be in a class all its own as far as mountain bike tourism goes. The city has hosted world events including the World Cup, EWS, and Crankworx, and in 2021 alone mountain bikers reportedly spent nearly $140M NZD in the region. The mountains and volcanic soil make for excellent riding conditions year round, and the scenery is among the best in the world.

Visitors will want to ride the trails in Whaka Forest for sure, and Skyline Gravity Bike Park boasts lift-served terrain that’s bikeable all year long.

Stellenbosch is a bit Jekyll and Hyde as a mountain bike destination, known for hosting both World Cup cross country racing and the Darkfest freeride competition. It’s located less than an hour east of Cape Town, making it easily accessible for international visitors and local riders alike. The Jonkershoek trail network is one of the most popular places to start, offering 20km of scenic and rugged singletrack.

Without a doubt there are great places to ride in Asia and South America, though we didn’t receive enough nominations to make any definitive selections. Over the years our staff and freelance writers have covered riding in a few locations including:

Manizales, Colombia has hosted EWS racing, and Petrópolis, Brazil recently hosted a World Cup race on a trail system designed in part by Henrique Avancini. We’ll be keeping an eye out for emerging mountain bike destinations in Asia and South America, and welcome tips and suggestions via the comments below.

Singletracks may receive compensation for purchases made through any affiliate links in this article.

Trails
The 12 Best Mountain Bike Destinations in the USA [2022]
Trails
Worldwide Shredlist: Finale Ligure, Italy AKA "Whistler By The Sea"
Trails
Off the Lifts and Into the Backcountry in the French...
Sponsored
5 Reasons to Participate in the Quebec Singletrack Experience

Hopefully it’ll be worth visiting Cairns for more than the Great Barrier Reef in the next couple of years. Plans are underway for a new 90km Derby like trail network in Cardwell (2 hours south of Cairns) and an 80km extension of Smithfield trails which is also hosting Crankworx over the next three years!

I know, I know, you have receive a ton of suggestions, but talking of Vallée Bras-du-Nord and not mention Sentiers du Moulin and Empire 47 around Quebec city is surprising to say the least!
Good day to you!

Great article. Good to see some Asian and Australian destinations. There are lots of great trails in Western Australia as well. 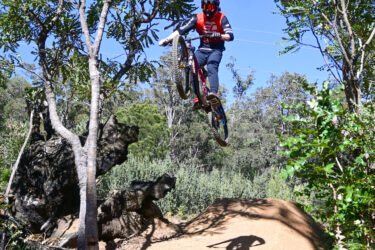 This is a really nice, diverse list with a ton of fantastic destinations–many of which I’ve visited, others of which I need to go to. Thanks for publishing it, Jeff!

I know you only mentioned Dawson City in one quick sentence, so hopefully, I don’t sound too negative here. But I do want to set the record straight in case somebody is reading this and thinks, “hey, I should go to Dawson City because it’s ‘an up-and-coming mountain bike destination'” — DON’T. It’s a super fun tourist stop that happens to have a couple of mediocre trails, but there’s max one day of riding there. It’s NOT a mountain bike destination in any sense of the word, and doesn’t belong in the same category as any of the other destinations mentioned on this list, like Cumberland in the next sentence. You could spend over a month riding in Cumberland, and one day in Dawson City.

For top-tier mountain biking in the Yukon Territory, Carcross is the #1 stop. That place is sick! Check out the documentary “Shift” for more info. Whitehorse also has oodles of trails! There’s much more mileage in Whitehorse than in Carcross, but the quality of the singletrack in Carcross is top-notch. Thankfully, Carcross is less than an hour from Whitehorse, so you can easily hit both of these in one trip.

If I can find enough time, I’ll try to pitch Matt a more detailed write up on some of these places 😉

Skip the biking in Dawson City.