Most mountain bikers treasure a good ride after a hard day; releasing tension after each pedal stroke and how the worries disappear as we meander through singletrack. For many in North America, getting to a trail doesn’t require too much effort.

Mountain bikers in Latin America don’t have it this easy. Lack of a volunteering culture, scarcity of public land, and economic disadvantage are a few of the barriers these riders face. We discussed these challenges with two mountain bikers who are making it work.

I am standing outside the Omni Hotel in Cancun, Mexico trying to catch a bus downtown. My goal is to rendezvous with the owner of Elite Cyclery bike shop, Alberto Cardenas.

Alberto told me he could take me to some old Mayan ruins by mountain bike and that we would even hit singletrack, with most of the ride being dirt doubletrack and gravel made up of deteriorated coral.

This was another hour away from downtown Cancun in a village named Naranjal, where the locals spoke Mayan and mainly survived by making charcoal. Alberto told me this was the only riding in the area and that they were thankful for it, yet his dream was to someday build a more accessible bike park with a few loops of flowy singletrack closer to town.

Fast forward ten years and his dream became a reality.

Aberto founded Punta Venado Bike Park, a true trail center, with well-defined loops and a cadre of local Cancun riders who intermingle with tourists daily to ride IMBA-standard trails. This is an experience similar to what a lot of urban dwelling riders in the US and Europe experience. I spoke with Alberto about what it took to get there and the impact his park has had on the local MTB scene.

After being out of touch for ten years, his greeting was as warm as if we had ridden together just last week. Pleasant, with a quiet intensity that often permeates the spirit of many advocates, his energy was apparent and made me understand how he had surmounted so many obstacles and had been able to get milk out of coral to create a bike park in the heart of a flat region of the Caribbean.

The average elevation at Playa del Carmen, where Punta Venado Bike Park is located, is 33 feet. The average income is $5.69 per hour. These two figures alone don’t add up to a MTB bike park. Mix in the fact that most locals work six days per week and the consequent lack of a volunteering culture, and you have an uphill battle.

The park came to fruition when Alberto was given permission from investors to use a primo tract of land with the condition that he could use the land “until it sold.” Ten years later, the land is still up for grabs, and the park has flourished. The main source of revenue for the park is tourists who pay, as Alberto put it “the same fee as a bike park in the USA or Canada may charge,” or around $20 USD. Locals get a substantial discount in order to accommodate their drastically lower income and to incentivize mountain biking in the region.

Riders start on the green trails and graduate to black-rated trails. I asked about the mix between XC and more aggressive styles of riding and Alberto told me riders “much preferred the jumps, gaps and skinnies.”

It sounds like riders are the same no matter where they are from; fun tends to win over suffering. That’s not to say the XC scene is not alive and well in this part of Mexico. The park has hosted many cross-country events with riders coming from all over to race. Riders also come from mountain bike meccas to ride, including some members of Whistler’s Bike Patrol team, to escape Canadian winter snow. They bring their bikes and charge the park’s singletrack for a few days while on vacation, and return to Canada with tans and hard-to-believe stories. It’s not A-line, but the view is sweet and the Pacificos are cheap.

Alberto went through a lot to get this park going. He started riding in 1994 while studying architecture in England, where he first experienced a “trail centre” as the British call it. Subsequently, he traveled to Whistler, Oregon and Europe to see how trails were built, consumed IMBA courses and trailbuilding books, and traveled within Mexico to benchmark. The work is ongoing, as he continuously creates new trails and is now on the lookout for a new tract of land closer to Cancun in case the Punta Venado land is sold.

Mountain bikers in this metropolis were virtually nonexistent until Gustavo Terra, a local rider, set out to change things.

Mountain biking was originally done in the mountain regions of the state on natural trails and dirt roads only. Gustavo saw the potential in his family’s farm and decided to join a small group of existing mountain bikers who were already utilizing the land to ride. They started cutting singletrack, building jumps, and most importantly, spreading the culture of MTB to the area. Like most of his counterparts in Latin America, Gustavo had to overcome obstacles such as the lack of a volunteering culture, lack of equipment and a general disinterest in MTB. He lit a spark by hiring local help to cut trails and got creative with trail features, building tabletops, doubles, berms, and skinnies.

The hard work paid off as the locals slowly started coming and spreading the word. He told me his ongoing challenge has been balancing the creation of fun, flowy, easier trails and integrating them with harder, more technical features. Trying to attract new riders who will grow the sport, while at the same time appeasing experienced mountain bikers, requires a tricky balance.

Today, Terra na Veia (a play of words on the Portuguese word for “dirt” and his last name) is one of the largest MTB parks in Brazil and the only one in the state.

As I thanked Alberto and Gustavo for their time, and reflected on my exchanges, I couldn’t help feeling a little guilty that I was going to go on a ride later on my local trails at Blue Clay Bike Park in North Carolina. I wasn’t going to have to pay or drive too far, the trail would be well maintained by an abundant roster of volunteers, and I would pass several well stocked bike shops on my way to the trails, should I need any supplies.

Sometimes it takes seeing things through others’ eyes to realize what we have. And what we have is very good indeed.

“milk out of coral “😅 literally it was like that! , as a frecuent local rider of punta venado, I loved your comments . All the passion Alberto and his team put on every event , new trail, new “toys for riders”, have made many of us , who never thought MTB or XC , would be our new source of happy moments . 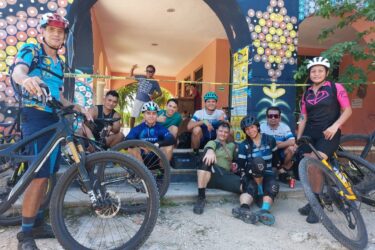 Gracias Mayris!
Alberto truly is a MTB hero for that area. I rode with you guys about 10 years ago and was amazed to see the love for MTB all of you displayed. Glad to see how the sport has progressed in that area!
Daniel Cerqueira

Great insight. I too, have ridden in Mexico. We pedaled some double track ATV trails to some Mayan ruins. While the experience was cool, it wasn’t a trail I would MTB often. Good to hear some fellow MTB’rs are getting things going. It makes me want to go hit up this guy Alberto for a ride.